The first nation-wide Science Festival organized by bKash and Biggan Chinta, came to an end with much enthusiasm and festivity. After the regional science festivals in all seven divisional cities across the country, the final round has been organized at the premises of Residential Model College on this Friday. Nearly 700 students from all over the country participated in the program.

Labibur Rahman, a student of class six from Adamjee Cantonment Public College won the first prize for his innovative science box which allows anyone to kindle a laser light, rotate a fan, charge mobile phone and do many other things only by magnet. The 2nd prize was won by three students from Barishal Zilla School: Ahadul Islam, Samin Ahmed and Nafis Mahmud. Third prize went to Saad Bin Hayat, Md. Mashfi Junaid and Sultana Sarwat; all three from Armed Police Battalion Public School and College. 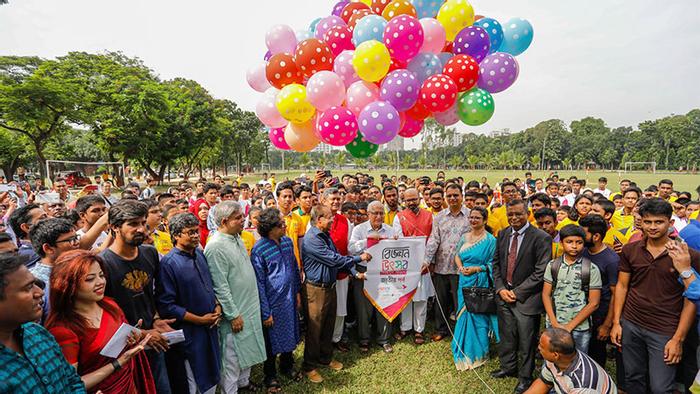 The brilliant students showed their love for science by presenting extraordinary projects and inventions, such as: road expansion technology keeping trees unaffected, English translation machine for understanding gestures of the speech impaired people, robots that can draw pictures, automated machine for police to detect unlicensed cars, high-powered speakers at low cost, easy-to-carry water-irrigation pumps and many more.
The nation-wide science festival started in Dhaka on 19th April, 2019. Subsequently, the program expanded to all 7 divisions of the country where more than 1200 students from around 150 schools participated. It is from the thoughts of the little geniuses that they solve their problems by creating scientific projects which lead them to solving bigger problems of the society. Around 300 projects have been presented by the students in all phases of the science festival across the country.

Prothom Alo Bandhusabha has assisted in organizing the whole science festival with the slogan of 'Biggan-e Bikash' (Grow in science) to encourage school students to study science.

Launched in 2011, bKash, a joint venture of BRAC Bank, US based Money in Motion, International Finance Corporation, Bill and Melinda Gates Foundation and Ant Financial, operates as a payment service provider offering broad range of digital financial services under the regulation of Bangladesh Bank.

Police- Students face off in Rampura

Half fare for students is effective in the capital

The comments of the doctors on Khaleda’s health is tutored: Information Minister

Student killed under wheel, bus set on fire at Rampura

‘Physicians are talking tutored comments about the sickness of Khaleda’

Instruction to get alert at all airports to prevent ‘Omicron’