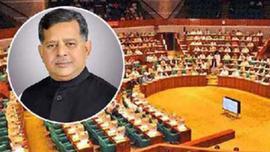 From JS Bhavan: State Minister for Civil Aviation and Tourism Mahbub Ali said the Biman Bangladesh Airlines has made a profit of Taka 423 crore in six months in the current fiscal year.

“Biman has made a profit of Taka 423 crore in the last six months from July to December 2019,” he said while replying to a starred question made by treasury bench lawmaker Abul Kalam Azad of Jamalpur-1 in the House here on Sunday (Feb.16). He disclosed this in the session chaired by Speaker Dr. Shirin Sharmin Chowdhury.

At present, Mahbub Ali said the ticket selling and seat booking of the national airlines has already been opened for the public with the launching of a mobile app named ‘Biman Airlines’.

Bangladesh Biman is now operating 18 aircrafts to 17 international destinations in 12 countries and 7 stations under the domestic route.