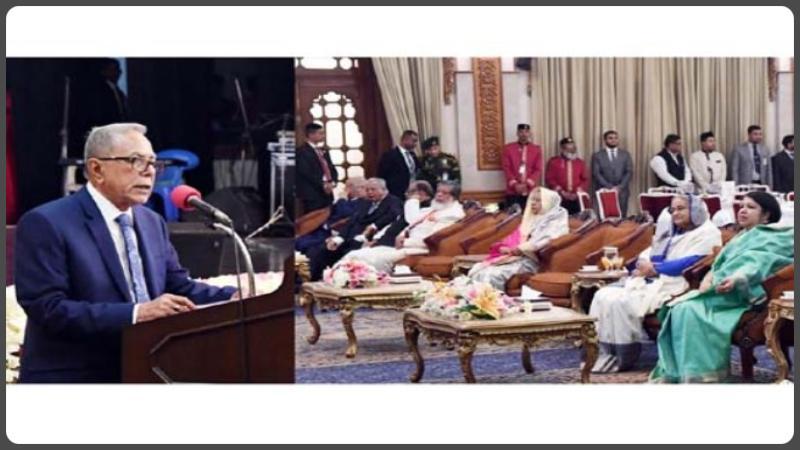 President M Abdul Hamid today urged lawmakers to strengthen relations between the government and the people to make the ongoing advancement and democratic polity sustainable.

The advancement and democratic growth will be more sustainable as much as the bridge of relations between government and people will be more strong and solid, the President told a banquet, hosted in honor of the Prime Minister, speaker, cabinet members and lawmakers at Bangabhaban here.

The head of the state asked the lawmakers to highlight the demands and expectations of people before parliament and play an effective role in making the House the focal point of all activities.

He also advised the members of parliament (MPs) to visit their respective constituencies regularly and stand by common people as they elected them (MPs) by casting their (people) votes.

This will help strengthen the people’s tie with the party as well as the government and a strong communication will also be established subsequently, he mentioned.

Referring to the long-cherished hopes and aspirations of common people, the President said, People demands are very limited; they are satisfied with getting very little. They want to get their leaders near them during their need. So, always maintain your good communication with them.”

Terming the opposition an important partner in the Jatiya Sangsad (JS), the President said it is very urgent to make parliament effective through the objective criticism and positive role of the MPs.

Then the parliament will become the center-point of government’s activities, President Hamid added, hoping that the development and democracy would go forward simultaneously.

Mentioning the country’s overall development trend a very satisfactory under the farsighted leadership of Prime Minister Sheikh Hasina, President Hamid said Bangladesh has now become a role model of development across the world and lawmakers are also a part of it.

At the very outset of his banquet speech, the President paid tribute to Bangabandhu Sheikh Mujibur Rahman, the greatest Bengali of all time, all valiant Freedom Fighters, Language Movement heroes and other patriotic souls who had to sacrifice their lives for the sake of the country and nation in different time.

Earlier, President Hamid along with his spouse Rashida Khanam welcomed the Prime Minister with a bouquet as she arrived at the President Palace at about 7.30pm. High civil and military officials then accompanied the President.

Later, the President and the Premier entered the Durbar Hall and exchanged greetings with the cabinet members and MPs.