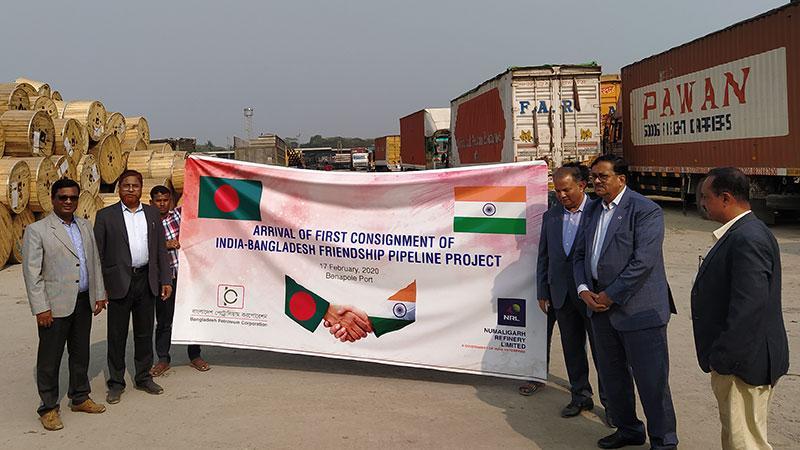 First consignment of the pipes required to build the 130km long 'Bangladesh-India Friendship Pipeline' from Siliguri to Parbatipur for import of fuel oil have entered Benapole land port.

On Monday (Feb. 17) the businessmen of both the countries started formal handover of pipes to the Benapole TT Terminal.

Importer is Bangladesh Petroleum Corporation and while Exporter is India's Namaligraha Refinery Limited.

Traders said Bangladesh has to import fuel from other countries, including Dubai. It would have taken long time spending excess money. Now oil from Siliguri, India, through the pipeline will reach Parbatipur in a quickly at a low cost.

Motiar Rahman, director of the Bangladesh-India Chamber of Commerce, said another milestone in the cordiality has been set up. With the help of the Government of India, the fuel will come in handy in the pipeline.

Engineer Md. Md. Tipu Sultan, GM of Meghna Petroleum Limited told barta24.com, "The fuel will come at a low cost in a short time and both countries will be benefited.

On September 18, 2017 the Prime Ministers of Bangladesh and India had inaugurated the Friendship Pipeline. The 130 km long pipeline from Siliguri to Parbatipur is spread 5 km in India and 125 km in Bangladesh.

Work on setting of pipeline will begin within next March. Meanwhile the land acquisition process is at its final stage. This pipeline setting work will be done at estimated costs of Taka 650 crore. Of the total amount the government of India is paying to Bangladesh Taka 300 crore which is non-refundable.