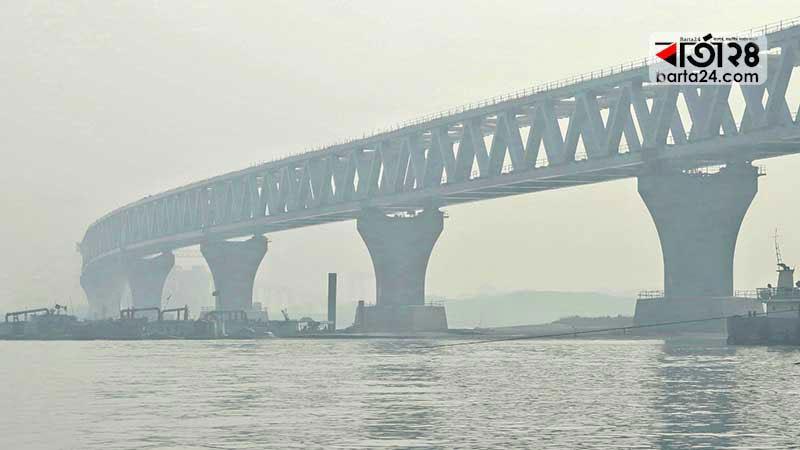 The 25th span of Padma multi-purpose Bridge will be installed on pillars 29,30 at the Jazira end of Shariatpur district on next Friday (Feb. 21). Earlier through installation of 24th span on last February 14,   3.60 kilometers of the dream bridge had become visible.

Sub-Assistant Engineer of the project Humayun Kabir confirmed it to barta24.com.

There are 42 pillars on the entire Padma multipurpose Bridge. Each pillar had six piles. Distance from one pillar to another is 150 meters. On this distance, bridges are being constructed with long steel structures or span joints. 42 spans will be installed on 41 pillars. Span parts are made in China and then were brought to Bangladesh.

The entire bridge will have 2,931 roadway slabs. While the railway slabs will be installed at 2959. The construction of the roadway slab on the span of Jajira on the Padma Bridge has begun and simultaneously work on the railway slab is going on by the local and foreign engineers.

The two-storied Padma Bridge is located between Mawa of Munshiganj and Jazira of Shariatpur.  The length of the main bridge is 6.15 km.

It is expected that by the end of June this year, all spans will be installed and by July next year, the Padma Bridge will be opened to traffic.

Meanwhile, construction work of the Padma main bridge constructed on the strong current flowing Padma River has been completed to 85.50 and the work on river training is done to 66 percent. Moreover, the overall progress of the project is completion 75.56 percent work.